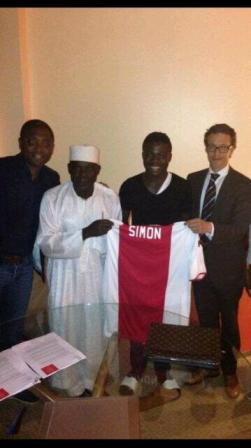 Coach Frank de Boer handed a debut to Nigeria youth international Moses Daddy - Ajala Simon and the new acquisition repaid the faith shown in him by the gaffer, netting in the 66td minute of the encounter.

After a scoreless first half, Kolbeinn Sigthórsson opened scoring in the 49th minute. Viktor Fischer doubled the advantage for Ajax 14 minutes later.

Meanwhile, Ajax will travel on Monday to the village De Lutte, where they will hold a training camp ahead of the resumption of the league on August 2.

18 - year - old Daddy - Ajala Simon was not summoned by manager Frank de Boer for the trip to De Lutte.

He was on the bench throughout the Flying Eagles campaign in the just concluded Under 20 World Cup held in Turkey.