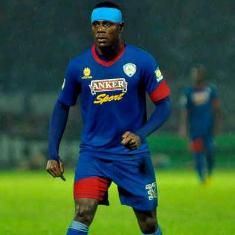 Former First Bank defender Victor Igbonefo has said that the match against English Premier League club Arsenal this past weekend was one of the highlights of his career.

''It was a great honor to play against Arsenal..... one of the high profile matches I have been involved in.

''They are a very good team as we know, play football in a very simple way.

''It was a very bad day for the Indonesia 11. In the squad, we had some young players who previously had no international experience.

'' We all are expecting a better outing on Saturday against Liverpool as some new senior players joined the squad last night.

''Also we play Chelsea on the 26th of July. The games are important because they make us richer in experience ,'' Victor Igbonefo said to allnigeriasoccer.com.

Victor Igbonefo, who has three caps for Indonesia , is no longer eligible to play for the Super Eagles but he does not regret his decision.

On the back of his fine performances in the Super League, he was handed a call up by the national team selectors.

''I have been here since I left First Bank in 2004. I have won so many trophies and play in the Champions League almost every season.

'' The Indonesia Football Federation were watching me and they later came up with the offer to naturalize me in order to make me play for their national team.

'' I was so happy about the proposal but I had to contact my mom back home in Nigeria to give her green-light,'' he said.