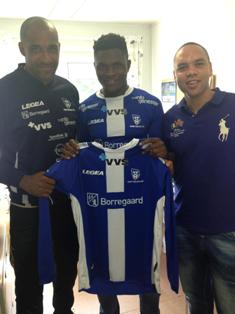 Sarpsborg 08 striker Aaron Samuel is over the moon after he earned his first call up from Stephen Keshi for the exhibition match against South Africa on August 14.

Last Wednesday, Stephen Keshi picked the 19 - year - old as one of the standby players for the trip to Durban.

''It's the dream of every professional footballer to play for the national team, everyone says that.

'' I must confess I was shocked but happy to see my name on the list.

''Credit must go to the manager (Stephen Keshi, ed) for keeping an eye on all Nigerian players across the globe.

''So many strikers I look up to have been invited - Emenike, Moses, Victor Obinna and Musa - I can only learn from them and be a better player when I return to Sarpsborg.

''If I eventually make the trip, it would be an honor to score on my debut for the Super Eagles,'' an elated Aaron Samuel told allnigeriasoccer.com.

In the coming days, Aaron Samuel will start processing his visa to South Africa.