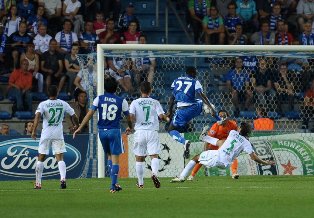 Through a statement on its official website, Belgian second - tier club Royal Antwerp has announced that it has signed Funso Ojo on a two - year contract.

The 22 - year - old defensive midfielder was offered a contract by Jimmy Floyd Hasselbaink's side after a successful trial.

Funso Ojo, who spent four seasons with Holland powerhouse PSV Eindhoven, will now defend the colors of Antwerp until the summer of 2015.

In addition, the Antwerp born player has represented VVV Venlo and Beerschot AC in the past.

Recall that this summer Funso Ojo was close to signing a deal with Chievo Verona but the transfer failed to materialize.

He could make his debut next Wednesday when Antwerp trade tackles with Eupen.