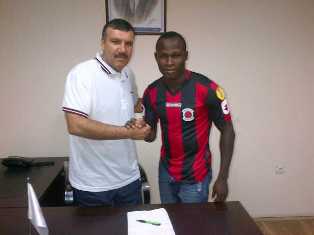 Dele Olorundare has been given the go-ahead by the Turkish Federation to make his debut on Sunday when TKİ Tavşanlı Linyitspor clash with Bucaspor.

On Friday, TKİ Tavşanlı Linyitspor released a statement confirming that the 21 - year - old attacker will play on loan at the club until the end of the 2013 - 2014 season.

'' I am with a copy of the English version of Dele's contract now. He joined TKİ Tavşanlı Linyitspor on loan for the next one - year.

'' He is happy, has adapted to the club and scoring goals in training.

'' The club did everything to get his International Transfer Certificate on Friday evening because they want him to play on Sunday,''Dele Olorundare's manager, Segun Ogunbayo specially informed allnigeriasoccer.com.

The Kã¼tahya province outfit have no point from their first two matches in the First League.