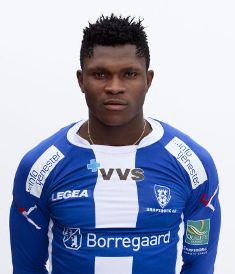 Former Super Eagles invitee Aaron Samuel was amongst the goalscorers as Norwegian Premier League campaigners Sarpsborg 08 thrashed Tromso 3 - 0 in the 24th round.

Due to his lack of first team opportunities at Vålerenga, the teenager departed the Oslo based club in the summer transfer market and signed a three - year deal with Sarpsborg 08, who are managed by ex Leeds striker Brian Deane.

“ I want to thank the coach for my recent form. The manager (Brian Deane,ed) was one of the respected strikers in the Premier League during his playing days.

“ And during practice, he advices me on the weak areas of my game and we also work on my finishing.

“ I am more confident going into the matches,” Aaron Samuel said to allnigeriasoccer.com.