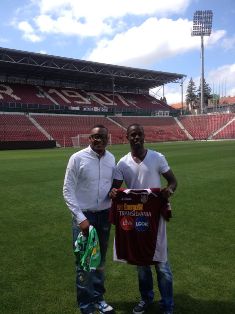 Romanian Liga 1 team CFR Cluj thrashed Otelul Galati 7 - 2 in the tenth round of matches in the championship on Monday evening.

The scoreline tied the record for number of goals scored in a single match in the top division, according to the official website of the FRF.

“Happy for the second career hat - trick, but most importantly the team deserves the credit,” said Derick Ogbu.

He was introduced by manager Petre GrigoraĂ in the 57th minute..