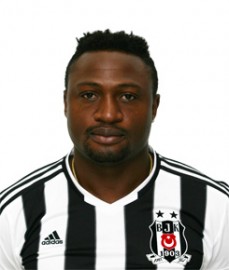 In the 11th round of matches in the Turkish Super League, Besiktas defeated Kayserispor 3 - 0.

Olcay Sahan opened the scoring for the Eagles in the 21st minute and eight minutes before the end of the tie at Kadir Has Ă…žehir Stadium, Brazilian defender Ramon Motta added a second.

Nigeria international Michael Eneramo netted his first goal in the championship for BJK in second half injury  time.

The 27 - year - old striker was introduced by manager Slaven Bilic in the 73rd minute.

Besiktas are provisionally fourth in the standings, with 21 points in the kitty.