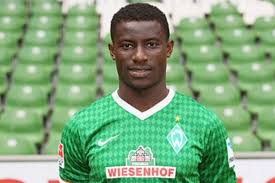 Nigeria international Joseph Akpala has insisted that he will not get carried away with his recent form in front of goal.

Akpala arrived Karabukspor on a season - long loan loan  from Werder Bremen just before the close of the summer transfer window.

He has netted 4 goals in 10 Super Lig matches including his strike against Fenerbahce on Sunday.

And the former Bendel Insurance marksman has thanked the fans and his teammates for their support.

“It’s a good feeling to come back to scoring again after a rather difficult season with Bremen but all that has changed now.

“I have proved again I can get among the goals and I’m happy about it. I hope to continue scoring and lifting my club up the log.

“It’s been great for me doing my thing for Karabukspor; the atmosphere, the fans and my colleagues have always given me the push.

“I will not disappoint them as I will always aim to hit the target in the subsequent games,” Akpala was quoted as saying by National Mirror.

In addition to his 4 goals in the topflight, he scored a brace in the Cup clash with Manavgat Evrensekispor on October 30.