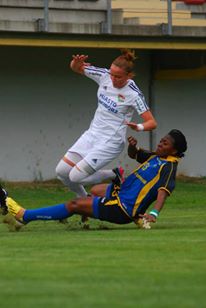 The Nigerian flag has become synonymous with female football events at the senior, U20 and U17 level.

Ask the Confluence Queens Supporters Club Chairman, Hon Moses Nagogo Bako, and he will tell you that the Nigerian flag may similarly fly high in the 2014 FIFA U17 Women’s World Cup to be hosted by Costa Rica.

An avid female soccer fan, manager and advocate; Bako spoke to Facebook handle, Naija Female Soccer on Saturday where he said he expects the Flamingoes to triumph in the 2014 edition of the Female Cadet World Cup.

The team will compete in Group D of the draws and have Colombia, China and Mexico to contend with.

“I’ve been following the team under the guidance of Bala Nkiyu and ex-international Anne Chijiene this year and I’m impressed by their work rate,” he said when asked to pick his favourite.

“They have a good team and can win in the North America nation.”

His confidence arose from the technical input of both coaches and the talented materials available to them.

“There are lots of talents in the Flamingoes camp, natural talents drawn from the Nigeria Women Football League, Sport Festival and some Academies.

“It’s great that they are under the supervision of two sound minds (Bala and Anne), who are technocrats of the game.”

The team will resume camping by January 2014, the home stretch of preparation and the Kogi-born female football follower believe the best players will be picked for the FIFA event.