We Are Prepared For South Africa - Ugo Njoku 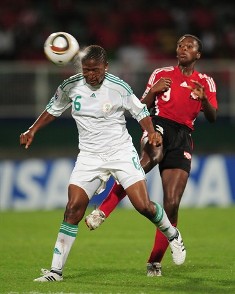 Bayelsa Queens wing-back, Ugo Njoku has declared that the Falconets are ready for South Africa U20 girls ahead of the final round of Canada 2014 U20 Women’s World Cup qualifiers.

Ugo credited the confidence on good preparations they have had so far with the side currently camping in Abuja for the mouth watering fixture.

“We will win against South Africa for we will do our best and ensure that we are not afraid of them.

“We won’t overlook them but have to know where to draw the line between respect and fear.

“We have had good preparations and train twice a day. In the morning we have tactical session and in the evening, it’s technical.

“That’s how we are doing it and we are coping,” she said

The Nigeria U20 female side under the tutelage of Peter Dedevbo accounted for the ouster of Sierra Leone and Tunisia, winning 16-0 and 8-0 respectively.

At the final round, Nigeria will face South Africa, while Ghana have a Jericho to climb in Equatorial Guinea.

Two teams will represent Africa at the 2014 FIFA U20 Women’s World Cup scheduled for 5th -  24th August in Canada.