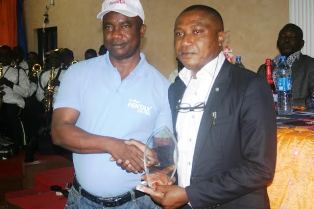 In a bid to show appreciation to a  continuous supporter of Nigerian Sports, Sports Writers Association of Nigeria (SWAN) Oyo State chapter during its 2013 end of the year week has bestowed an award of honour on the Nigerian Breweries Plc in an elaborate event held over the weekend in Ibadan.

The Chairman of Oyo State chapter of Nigerian Union of Journalists (NUJ) Comrade Gbenga Opadotun who presented the award to Tayo Adelaja, Public Affairs Manager, West mid/west Nigerian Breweries described the good gestures exhibited by NB over the years to sports development, not only in Oyo State, but Nigeria as whole as big factor that has driven the sector.

The Oyo NUJ boss however, urged many other corporate bodies to emulate the good disposition of NB to sports in Nigeria and come out to support Nigerian sports especially at the very grassroots level where most company considered as less attractive but the most important area to the growth the sector.

Adelaja while reacting after receiving the award on behalf of NB thanked Sports Writers for the honour while pledging more support from Nigerian Breweries to Nigerian Sports and good collaboration with SWAN not only Oyo State chapter, but at all levels, saying the story of many successes NB has recorded in Nigerian cannot be complete without mentioning support derived from Nigerian journalists.

The Nigerian Breweries however, promised not to relent in supporting not only sports in Nigeria, but all youth oriented agenda, while describing SWAN as a vibrant body and a good partner in progress to NB.