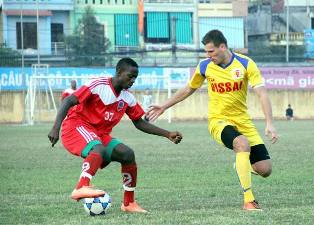 The former Sunshine Stars forward is delighted to have opened his goal account in the Asian country in the 1 - 6 loss to Song Lam Nghe An on Sunday.

“The strike was consolation, but I really value it as it will give me confidence to score more.

“I chose to prove myself in a new environment and I’m enjoying it.

“The only thing I can do is to play well and score a lot. And then I think people will say that I’m a good player.

“I want to score more goals than the ones I notched in the Globacom Nigeria Premier League,” he told allnigeriasoccer.com.

20 - year - old Adamu has started and completed the two games played by Quang Nam FC in the V - League this term.