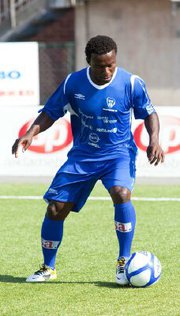 Norway based midfielder Stanley Ihugba is looking forward to the start of the 2014 season scheduled to kick off first week in April.

Ull / Kisa begin the new campaign with a home match against Sandefjord before traveling to face Kristiansund on April 13.

Having struggled for most part of the 2013 campaign, Ihugba is expecting the fortunes of his club to change this year and has advised opposition defenders to pay more attention.

“I think my target this season is to do well and get to the next level. And to make sure my team do well in the league.

“Pre - season has been good so far. We played our first test game yesterday, winning 3 - 1 against Stabæk

“We have a new coach Tommy Berntsen, my ex teammate at Lyn Oslo during the 2009 season.

“He is a young coach, played good football as a player . So for now, I think we are playing attacking football this year,” Stanley Ihugba said to allnigeriasoccer.com.

Ull / Kisa will train at the UKI Arena from 1600 hours for the next three days .

They meet HamKam in their next test game on January 31 before facing LSK, Eidsvold Turn and østfoldhallen in that order.