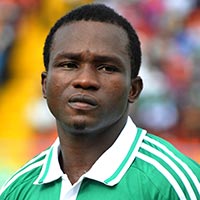 A great ball in from substitute Ejike Uzoenyi was turned in by the Enugu Rangers forward to give the win to Nigeria.

The Warriors were dealt a fatal blow when Nigeria keeper Agbim was clattered by Masimba Mambare, leaving the centre referee with no option but to give the tough tackling player his marching orders.

Obiozor went closest for the Super Eagles with a long-range shot, he also had his shot canon off the post in the 71st minute.

After creating few chances in the first half, Zimbabwe improved after the break as Sithole, had Eagles captain Agbim scrambling when his 25-yard strike flew just wide off the post.

But the goalscoring instincts of Obiozor, who made his CHAN debut, proved telling as the former Fame FC striker turned the ball past Chigoya.

Wounded Super Eagles, who lost to Ghana in the semi finals stage, gave their teeming fans something to cheer with the third place finish.