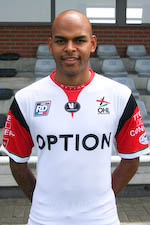 Veria were close to signing Marvin Ogunjimi in the January transfer window, which became shut in some parts of Europe on January 31.

Gazzetta.gr says Mallorca wanted to shred the contract of the Belgian - Nigerian, apparently to let him leave as a free agent.

But the striker had insisted that he wanted to join the Greek club on loan till the end of this season.

Marvin Ogunjimi was also on the wishlist of Beitar Jerusalem in the winter transfer market.