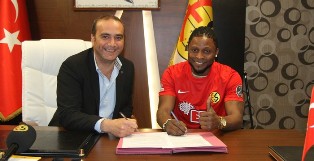 EskiĂ…źehirspor has secured the signature of Raheem Lawal on a three - and - a - half year deal , the Turkish Super League team has announced through its official website.

Speculation about his future has been rife in recent weeks with reports linking him with clubs in Turkey, Greece and Spain.

Now, the 23 - year - old central midfielder has committed his future to the Red Lightnings until the summer of 2017.

Prior to his move to EskiĂ…źehirspor , the former U23 international defended the colors of Atlético Baleares, Adana Demirspor and Mersin .

Raheem Lawal has been allocated the number 12 shirt at EskiĂ…źehirspor .