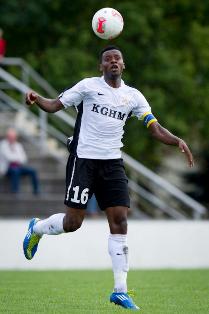 Paschal Ekwueme has been reinstated to the first team of  Pelikan Lowicz by new manager Maciej Bartoszek, writes the official website of the Polish club.

In December, the 31 - year - old was demoted to the reserves and placed on the transfer market by former coach  Gregory Wesolowski.

One of the first actions Maciej Bartoszek took when he resumed was to settle any dispute the previous manager had with Paschal Ekwueme.

The Nigerian forward is Pelikan Lowicz’s second highest goalscorer in the II Liga with 5 goals from 16 matches.

In the past, Paschal Ekwueme sported the colors of the reserve teams of Legia Warsaw and Polonia Warsaw amongst others.