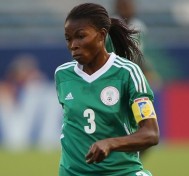 The Nigeria Women Premier Football League last weekend recorded two away wins; the first was in the star match of the week played at the ancient kingdom of Benin City where the visiting Ibom Angels piped their host Edo Queens by two goals to one.

The match actually lived up to its billing with both sides giving in their best.

This weekend, the Adams Oshiomole girls would be visiting Calabar to be guest to Pelican stars who also had the second away win in Yenegoa, against Bayelsa Queens.

The outcome of the match may likely compound the woes of the visitors.

Nasarawa Amazons would try to redeem their deflated ego at home when they host Bayelsa Queens in Lafia.

The once dreaded Yenegoa based team lost their last weekend home encounter to Pelican Stars, but this weekend against another aggrieved team that lost by two goals to nil to Osun Babes.

It would take a miracle for Queens from Yenegoa to escape been bashed in Lafia.

It would be an Odua battle in Akure where Sunshine Queens would confront their kinsmen from Osogbo, the Osun Babes.

The star match of the week would be in Lokoja, where Confluence Queens would trade tackles with FC Taraba Queens.

The host who are still wondering what befell them last weekend in Oleh, Delta state where they were humiliated by Delta Queens by four goals to nil, after a scoreless first half.

But this weekend, they would strive to make something out their home encounter against the Jalingo based team who are yet to lose or win a match in the league.

Delta Queens would travel to Uyo to consolidate on their new found form where they are expected to be the guest of Ibom Angels.

Both teams were in spectacular form last weekend, where they picked their maximum points in their respective matches.

This weekend, the grass at the Uyo Township Stadium would surely suffer at the end of the ninety minutes, as a score draw may likely end the encounter.