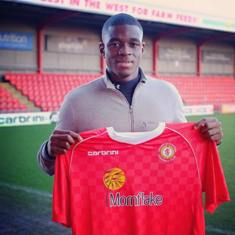 Anglo - Nigerian attacker Chuks Ikpeazu was praised by manager Steve Davis after the 3 - 1 defeat of Gillingham at Priestfield Stadium.

Even though the 19 - year - old  failed to get on the score sheet, he was a handful for the opposition defense.

He refused to be drawn into comparing his performance against Gillingham to the brace he netted against Bradford City last month.

“I do not know about best performance but I worked hard and helped the team and will take it game by game but I hope I can score the goals to keep us up,” Uche Ikpeazu said to allnigeriasoccer.com.

The former Reading youth - teamer, whose economic rights now belong to Watford, is on loan at Crewe Alexandra until the end of this season.