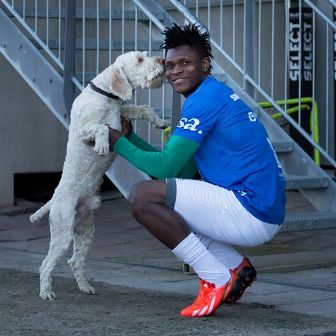 In front of 4,722 supporters, Sarpsborg 08 trashed SK Brann 3 - 0 on Sunday to go top of the Norwegian Premier League standings.

Nigerian striker Aaron Samuel was on target either side of the half, keeping his nerves in check to convert two spot-kicks.

And the 19 - year - old MUST have gone to celebrate his first ever brace in Europe with his new canine friend because he could not be reached for comments after the tie at Sarpsborg Stadium.

So Samuel’s agent Atta Aneke spoke on his behalf and told allnigeriasoccer.com, “Aaron was Man of the Match. He was fouled on both penalties which he scored. He was fantastic.”

Aaron Samuel, who was linked with a transfer to Monaco in the January transfer window, now has seven goals for Sarpsborg 08 since his switch from Vif.