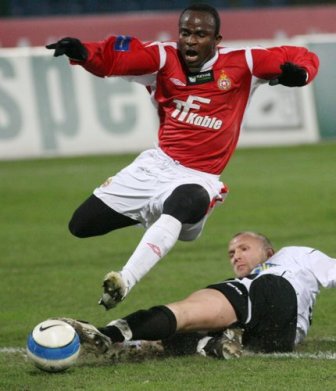 After netting his fifth goal of the season against former club Sporting Clube de Goa, Dudu Omagbemi has written off the I - League, stating that the Finnish championship where he played for three seasons is better.

Recall that in February, the 28 - year - old forward committed his future to Salgaocar for the remainder of this season.

“It is good to be back and doing well though I did not set a target than winning for my team, and the league here is not as competitive as the Finnish championship, ” Dudu Omagbemi told allnigeriasoccer.com.

And the former KuPS and FC Honka man said he had a premonition that he would score against Sporting Clube de Goa, whom he represented for 6 years.

“I did not celebrate when I scored against SC Goa but I knew I would score against them. They are a good side with a lot of young talents and both teams did well,” he added.

Dudu Omagbemi netted in each of his first four games for Salgaocar before increasing his tally today.