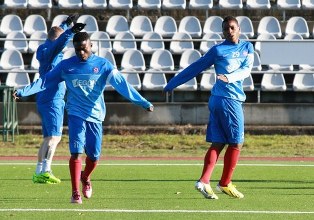 A brace by former Flying Eagles winger Moses Simon assisted AS Trencin defeat Spartak Myjava 4 - 1 in the 28th round of games in the Slovak championship.

The 18 - year - old has quickly settled to life in Slovakia after his failed move to Ajax Amsterdam last summer .

Moses Simon registered his name on the score-sheet either side of the half, adding to his two goals against Spartak Trnava and Nitra in March to take his tally to 4 for this season.

And he would have netted a hat - trick but the referee cancelled his  goal for offside.

Immediately after the game at Mestský futbalový štadión Na Sihoti, Slovakian website Sport7 selected him amongst the 11 players in its ceremonial Team of the Week.

With 5 rounds left, AS Trencin, who sit second on the table, trail leaders Slovan Bratislava with 11 points.