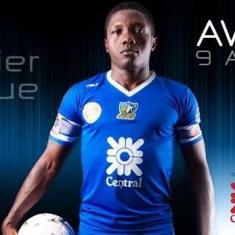 Air Force Central attacker Obinna Ajoku has pointed to the fact that his spell on the sidelines is a major factor why the Thai Premier League campaigners are struggling in the championship.

The Rangsit based outfit have lost 6 of their opening 10 games and currently sit last in the standings.

29 - year - old Ajoku penned a two - year - contract with Air Force Central before the start of this season, snubbing the overtures of Buriram United , Muangthong and Suphanburi.

“We are not doing well in the league because I was injured and only regained full fitness. Now I have started playing and scored one goal for my team.

“I am one of the important players in this club but unfortunately got injured before the league started,” Obinna Ajoku said to allnigeriasoccer.com.

Two weeks ago, he attracted interest from Kelantan but the leadership of Air Force Central failed to sanction his departure, insisting that the Malaysian club must pay $100,000 as rental fee.

Obinna Ajoku would have earned $240,000 wages at Air Force Central when his contract expires in 2015.