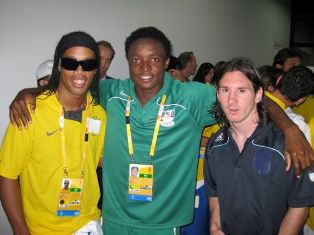 One - cap Nigeria international Emmanuel Ekpo has suggested that his limited playing opportunities for Molde this season was due to his contract situation.

Since the start of the Tippeligaen , the attacking midfielder has only featured in one game, lasting 46 minutes on the pitch in the home clash against IK Start at the start of this month.

The Beijing Olympic silver medalist has been offered a fresh two - year contract but the sticking point is that he has refused to accept the terms proposed by the two - time Norwegian champions.

“There was an offer no doubt from Molde but we have not reached an agreement yet. And that is the reason I am not being fielded in matches.

“There is a disagreement on the terms that have been offered. I am not sure when I am signing, hopefully sometime soon if this can be resolved,” Emmanuel Ekpo told allnigeriasoccer.com.

Since the 26 - year - old joined Molde from Columbus Crew in 2012, he has recorded 39 appearances in the Norwegian top flight.