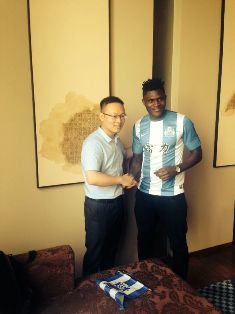 Aaron Samuel’s move to Guangzhou R&F is now cast in stone after the striker was unveiled few minutes ago by the Chinese club.

After spending the last two years with Norwegian Premier League teams, the former Shooting Stars, Ibadan starlet has appended his signature to a two - and - a - half - year contract, which will stop running at the end of 2016 season.

Aaron Samuel is in good physical condition, meaning he is in line to make his debut for Guangzhou R&F when they take on Guizhou Zhicheng in the FA Cup on Sunday, July 13, before his anticipated league debut against Jiangsu Sainty the following weekend.

For the remainder of this season, the 20 - year - old will don the number 25 shirt, earlier worn with pride by Yakubu Aiyegbeni.

Samuel was famously linked with a move to Monaco last summer but the Ligue 1 moneybags passed up the chance to sign him after trialing with them.