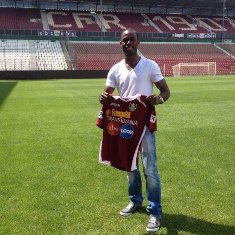 Two days after completing his switch to Liaoning FC from Romanians CFR Cluj, Derick Chuka Ogbu made his league debut for the Chinese Super League outfit.

The striker bagged a brace for Liaoning FC in the 3 - 3 draw with Shanghai East Asia FC in the 16th round of matches.

It took Derick Ogbu just three minutes to open his goal account for his new club, and he scored again in the 74th minute to give  Liaoning a two - goal advantage.

However, a brace from Wu Lei in the 79th and 90th minute saw both teams sharing the spoils.

For agreeing to sell the former OHL sensation to the Chinese club, CFR Cluj pocketed one million Euros as transfer fee.