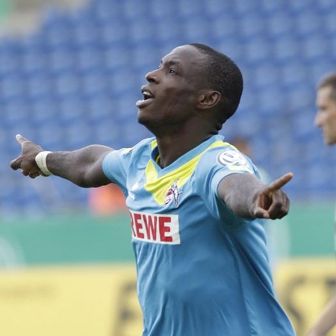 Cologne’s Anthony Ujah delivered a warning to Bundesliga defenders after scoring a second half brace in the 4 - 0 defeat of FT Braunschweig in the DFB Pokal on Saturday.

In his first official game of the season, the Nigeria international broke the deadlock in the 46th minute before grabbing his brace six minutes later.

“The goals came late because the opponents defended very deep but we got scoring chances still.

“But the goals came in the second half because we were patient and kept finding where to break them down,” says Anthony Ujah to allnigeriasoccer.com.

“Hopefully the two goals will boost my confidence into the season proper. The target is to stay in the first division at the end of the season but we will try to go as far as we can in the DFB Cup.”

Since moving to Europe from Warri Wolves in 2010, Anthony Ujah has 53 goals in 110 appearances for the teams he has turned out for, not taking into account his performances in cup competitions.

Cologne, who are making a return to the German topflight after two seasons, will entertain Hamburg next weekend in the league.