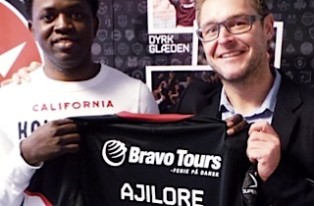 According to the official website, FC Midtjylland midfielder Femi Ajilore might return to the pitch after the international break after recovering from an undisclosed ailment.

The Nigeria international has not had game time at all in the current season for the first team, but he could return to the pitch today when the Reserve Team square off against Esbjerg.

The ex Groningen ace returned for a second spell at the MCH Arena in the January transfer window, but he has managed only  two substitute appearances since then, no thanks to his physical condition.

Time is running out for the 29 - year - old to prove he deserves a new contract , with his current deal set to expire at the end of this season.

In case you have forgotten, Femi Ajilore won silver with the Olympic Team at the 2008 games held in Beijing.