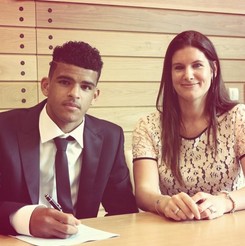 Highly rated Anglo - Nigerian forward Dominic Solanke has signed his first professional contract with EPL moneybags Chelsea, a day after becoming eligible to do so.

Solanke, who turned 17 on Sunday, was joint top scorer at the European Under 17 Championship held in Malta this summer.

The teenager, who has been at Chelsea since the age of 9, impressed last season for the Reserves, finishing as the leading marksman for the team.

“Pleased to say I have signed my first Professional Contract with Chelsea Football Club,” Dominic Solanke said on his official Twitter page.

Dominic Solanke, Tosin Adarabioyo (Man City), as well as Josh Onomah (Spurs) have been included in the England Under 18 squad to face Italy next Wednesday.