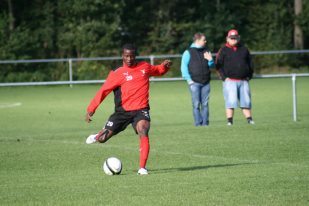 Noah Ojuola was delighted to score on his league debut for St. George’s despite his team losing 3 - 2 to Maltese First Division high-flyers Gzira United last weekend.

The former FC Midtjylland starlet penned a one - year contract with the Cospicua based outfit at the start of October after impressing the technical crew during a five - day trial.

“I like this team and that is why I signed for them. I am not happy that we lost because I always want to win games. But I am happy to score in my first game for the club.

“An opponent from Gzira nodded the ball and it met me. I played a shot; the goal is the best goal in the league for the week,” says Ojuola to allnigeriasoccer.com.

The 21 - year - old has been without a club for more than a year after he ran out of contract at Danish side FC Midtjylland .