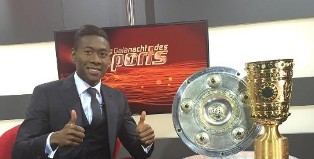 Bayern Munich defender David Alaba has retained Austria’s Sportsman of the Year Award, which he also won in 2013.

To scoop the prestigious accolade, Alaba beat downhill skier Marcel Hirscher by one point, and was recognized for his outstanding contribution to Bayern Munich and the national team in the year under review.

The 22 - year - old was not physically present at the gala event in Vienna on Thursday evening, as he was preparing for the Bundesiga clash against Borussia Dortmund on Saturday.

The voting was conducted by members of Association of Sports Media Austria.