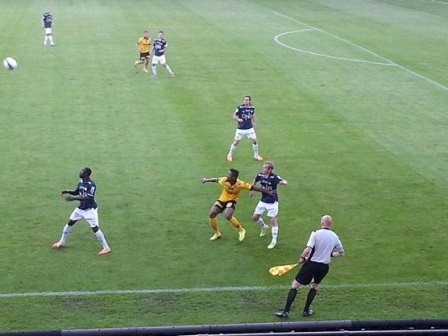 Freddy Friday was handed his first start as Lillestrom thrashed Dominic Chatto’s Bodø / Glimt in the 29th round of matches in the Norwegian Premier League.

And he repaid manager Magnus Haglund’s faith by netting a brace either side of the half, as the Canaries defeated their guests 4 - 0.

Norwegian - Nigerian agent Atta Aneke, who represents Freddy Friday, has stuck out his neck, saying the young striker will be a big hit for Lillestrom in the coming years just as Tony Ujah and Nosa Igiebor.

“I am happy he scored, the goals were very important for him. Lillestrom have a good history with Nigerian players, and fans have been expecting great things from him because of that.

“The coach has not really given him the chance. He scored two goals today, we expect more from him in future.

“He is big, strong, talented and has a great future ahead of him,” says Atta Aneke to allnigeriasoccer.com.

Summer acquisition Innocent Bonke made his official debut for LSK at åråsen Stadion, after his introduction in the 86th minute.