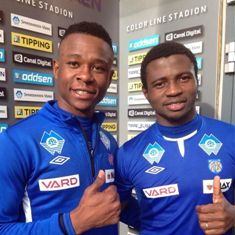 After a dismal start to their season, Aalesund forward Leke James has expressed his delight at the present league position of his team in the Norwegian Tippeligaen.

The Color Line Stadium outfit have been consistent in their last ten games in the topflight, winning six and drawing two, with Leke James contributing 7 goals out of the 19 that the club notched up during the period.

“The first half of the season wasn’t good, we were strugling but we woke up in second half. The spirit has been superb lately.

“There was a period where people started thinking we might be relegated but we turned everything around, and we have a chance to finish in sixth position, ”Leke James said to allnigeriasoccer.com.

The 22 - year - old refused to comment on whether or not he would be severing ties with AaFK before the start of next season.

Leke James still has contractual obligations with the club until December 2016.