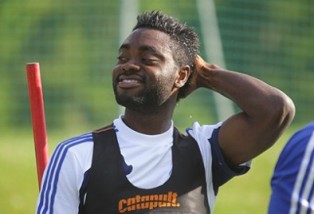 Dynamo Kiev coach, Sergiy Rebrov, has summoned 20 players for the trip to Romania, where the Ukrainian Premier League side will face Steaua Bucharest in Group J of the Europa League on Thursday evening.

In principle, half of the squad is composed of midfielders, but there is no place in it for Nigeria international Lukman Haruna.

Ever since the start of this season, Haruna is yet to play an official league match for the Kievites due to injury.

And even though he recently started full training with the club, he was no considered for the trip to Romania.

No matter the outcome of the game at the Stadionul Steaua , Dynamo Kiv will qualify for the knock out rounds of the competition.