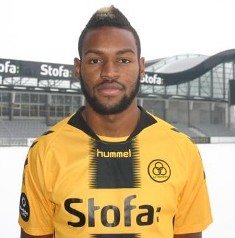 Ex USA Under 20 international Sebastien Ibeagha may have to return to his parent club AC Horsens at the start of January 2015.

The on - loan FC Fredericia defender is yet to get a positive feedback from the top brass at  Monjasa Park on whether or not he would remain at the club, with the agreement between Fredericia and Horsens set to expire in the next two weeks.

“Sebastien is 22 years and has played close to 35 matches in the first division. Players of the same age and the experience make mistakes and so does Sebastien too.

“But I just think he has all the prerequisites to become as good as Marc Pedersen for example.

“ Right now the situation with him is undecided and a little on standby while Horsens find out what they want,”said coach Nicolai Wael to bold.dk.

Sebastien Ibeagha scored his first - ever professional goal on October 26 in FC Fredericia’s 3  - 1 loss to Vejle.

His contract with AC Horsens will run out at the end of this season.