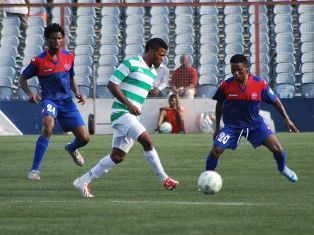 Allnigeriasoccr.com understands that two other Norwegian Premier League clubs will compete with Sarpsborg 08 FF for the signature of much - coveted Dolphins attacker Emem Eduok, 20.

While the identity of the two other interested suitors is classified information for now, this website understands that there are Nigerian players, who hold dual citizenship, currently on the payroll of both teams.

Discussions between Emem Eduok’s agent and the three Tippeligaen teams are at an advanced stage, with an announcement on the Nigeria B international’s preferred destination expected to be made in a matter of days.

It is thought that the Norwegian clubs will circumvent their recruitment policy regarding players from the Nigerian Premier League, meaning Emem Eduok will not have to attend trials before being offered a contract.

Meanwhile, reports from the Dolphins camp that he was recently in Norway to sign a three - year deal with Sarpsborg 08 are incorrect.

Lagging behind in the race for Emem Eduok are clubs based in the Middle East and Israel, as nothing has been cast in stone yet.