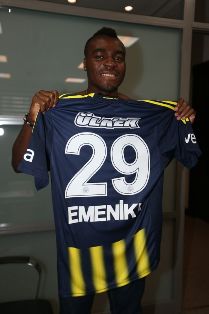 Emmanuel Emenike was among the goals for only the fourth time in the Super Lig this season, as champions Fenerbahce defeated Gaziantepspor 5 - 0.

The Nigeria international hit target in the seventh minute followed by second half strikes from Moussa Sow, Dirk Kuyt and Emre BelözoĂ„źlu.

The 27 - year  - old’s other goals in the topflight this term have come in games against Besiktas and Karabukspor.

The Yellow Canaries top the standings, with 46 points to their credit after 20 rounds, but they have played one game more than bitter rivals Besiktas, who are two points behind.