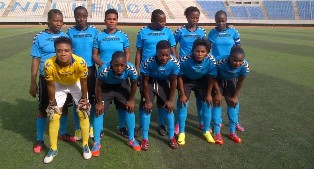 A last-gasp free kick from Mary Olaitan salvaged a 2-2 draw for Confluence Queens as they held Nasarawa Amazons in a friendly match played on Wednesday at the Lokoja Confluence Stadium.

It was the best Confluence Queens deserved as they struggled for possession for most parts of the game, even though they went ahead in the third minute thanks to a piece of individual brilliance.

Ogunleye Kehinde found her way through Nasarawa Amazons defense before slotting home to give her team an early advantage.

The 2012/13 Nigeria Women Premier League champions pressed for an inevitable equalizer with young winger Chinyere Igboamalu central to their move.

After being denied by Mercy Vincent a few minutes earlier, her mazy run found her enough space to stroke a ball across the penalty box that was gleefully tapped in by Stella Onyekachi after Oluchi Ezeji failed to deal with the cross.

And when substitute Oguchukwu Njoku beat the offside trap to silence the hosts in the 84th minute, it looked like Nasarawa Amazons would complete another brilliant pre season performance with a victory.

But dead ball specialist Mary Olaitan had other ideas at added time, as she ensured that both teams shared the spoils.