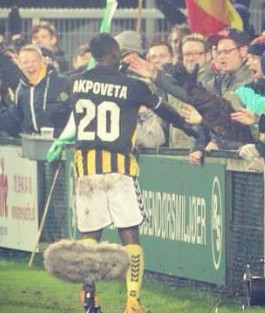 Brønshøj  forward Oke Akpoveta has spoken of his joy after scoring the equalizer  in Thursday afternoon’s derby against AB.

The visitors appeared to be coasting to victory courtesy of Nichlas Rohde’s third minute goal until Akpoveta sent his teammates and home fans into ecstasy after leveling the scoreline in the 84th minute.

“It was a derby game, so we knew it was going to be a very tight game, ” Oke Akpoveta said to allnigeriasoccer.com.

“We had some good chances after the red card (to Mads Gabel). It was good to comeback from a goal down.

“Our trainer made a good substitution. ”

In four days, Brønshøj will travel to Herfølge Stadion Kunst (Herfølge) to face HB Koge, and the Nigerian striker is optimistic that his team will secure the maximum points.

“That will be another tight game but we believe we can secure points there.

“Everybody in the team know the situation it’s not that good at the moment, so we go there and fight to get points,” the Brønshøj number 20 concluded.

The Warri Wolves product has notched 5 goals in his last 9 games across all competitions.