Subscribe
Norwegian Premier League Round Up : Leke James And Bentley Score; Dominic Chatto Returns To Starting Line - up
Published: May 03, 2015 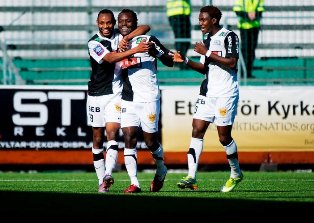 Allnigeriasoccer.com runs the rule on the Nigerian players that were in action for their Norwegian clubs on Saturday and Sunday.

Belgium international Marvin Ogunjimi lasted two minutes on the pitch in Strømsgodset’s 1 - 1 draw with Sarpsborg 08.The striker has started only two games after six rounds in the Tippeligaen.

For the second straight game and in a space of two days, Leke James was on target for Aalesund, who defeated Bodo/Glimt 2 - 0.

Former Flying Eagles star Solomon Owello was a 78th minute for IK Start in their 3 - 1 win over Tromso. He has started three games this term.

After netting his first professional hat - trick hero in Lillestrom’s last game, Fred Friday was named in the starting XI for the Canaries in their 1 - 1 draw with Valerenga. Innocent Bonke did not make the 18 - man squad for LSK.

The ex Flying Eagles star equalized for the home team in the 27th minute after Paal Andre Helland netted the opening goal for RBK in the 10th minute.

Viking, who pay the wages of Adegbenro and Abdullahi, will be in action on Monday against Molde.