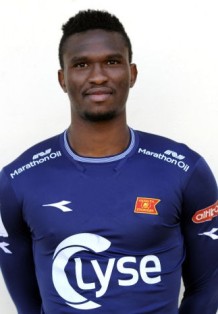 Viking striker Osita Chikere was pleased to score five goals in the 9 - 0 hammering of  IL Varegg in the second round of the Norwegian Cup on Thursday night.

The former Sunshine Stars man has refused to take the credit alone as he thanked his teammates for making it possible to net 5 goals in a single game for the first time in his career.

“I am grateful to Almighty God who made it possible and also my teammates. I hope to score more in the league this season, ” said Osita Chikere.

The Viking number 18 is yet to open his account in the Tippeligaen in 2015 after six rounds.