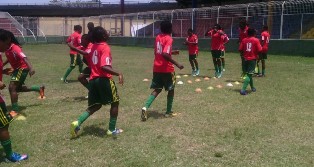 Rafiat Sule and Joy Bokiri continued their heroics as they scored a goal each to power Bayelsa Queens to a comfortable 2-0 win over Adamawa Queens in the match day two of the Nigeria Women Premier League at the Oghara Township Stadium on Saturday.

Sule fired Bayelsa Queens upfront with a sumptous strike in the 27th minute before Bokiri cemented the win sixteen minutes from time.

The duo had inspired Rollandson Odeh’s women to a deserving 2-1 win over FC Robo last weekend.

For coach Odeh, he needed the maximum points from the game to assure fans of the level of development of his squad.

However, the visitors were unable to contain the homers beyond the 27th minute as Sule did well to stroke home for the opener.

Adamawa Queens came in strongly but Bayelsa Queens varied their play after the second half and pressed for the second goal but the hosts were wasteful.

Bokiri proved her relevance for the former league champions when she sent the ball past the keeper for her 2nd goal of the season.

Bayelsa Queens increased their tally to 6 points and are still on top of the ladder while Adamawa Queens have 3 points from 2 matches.