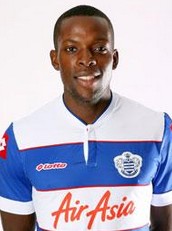 Queens Park Rangers defender Nedum Onuoha is rueing his red card against Liverpool last weekend, which will make him sit out the Premiership clash with Manchester City on Sunday afternoon.

Onuoha, a former England youth international, spent 18 years at Man City before joining QPR in 2012, and it would have been an emotional return to The Etihad Stadium.

“It’s going to be tough to get three wins, but we won’t be giving up, ” Nedum Onuoha said to mcfc.co.uk.

“Things have gone against us in the games we really needed to win but there are still nine points to play for so we have to try and get them all and see what happens.

“It’s not in our hands but we have to keep believing. ”

Born in Warri, Onuoha played 116 matches for Manchester City before his permanent move to QPR.