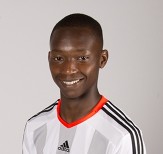 Fulham defender Tayo Edun was sent off as England’s bid to defend the European Under 17 Championship crown they won in Malta last year ended at the quarter - final stage following their 1 - 0 loss to Russia on Saturday.

For the first time in the tournament taking place in Bulgaria, manager John Peacock did not hand a starting berth to the Anglo - Nigerian players in his ranks, with the trio of Tayo Edun, Layton Ndukwu and Ike Ugbo all named on the bench.

On the hour mark, Tayo Edun replaced Holland and he went on to pick up his first booking in the 73rd minute before he was given his marching orders by  the referee seven minutes later.

The England Under 17s will be hoping to qualify for the World Cup in Chile when they tackle Spain on Tuesday.