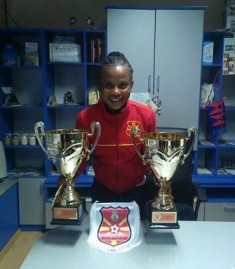 Nigerian born defender Glory Afonja wants to win a silverware as her team Å½FK Kochani will clash with Å½FK Dragon 2014 in the final of the Macedonia Women’s FA Cup on Thursday 21st May.

The former Edo Queens utility player has been impressive since she joined Kochani less than three months ago.

The two rivals will resume hostilities in the final of the FA Cup on Thursday, with Glory hoping to help her team secure the title.

“Everyone is now looking forward to the final as we try to beat them,” she said in a chat with women league reporter Ademetan Abayomi. "I hope the FA Cup can be special for us.

“It’s a competition. But I have my faith. If we work hard we would be successful. I’m optimistic about the game,” the soft-spoken player added.