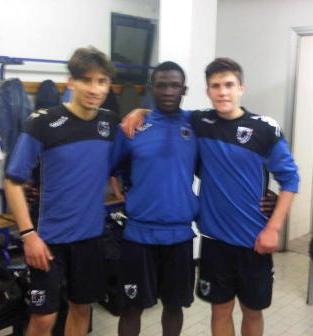 Flying Eagles striker Billy Michael Auta returned to his homeland on Wednesday morning after a week in Norway, where he underwent trials at Tippeligaen champions Molde.

If not for his visa which is about to expire, the El-Cruzero product would have remained in Scandinavia , according to the intermediary that recommended him to MFK, Atta Aneke.

“Auta’s German visa expired, we tried to extend the visa but it was not possible so he had to return to Nigeria today, ”  says Atta Aneke to allnigeriasoccer.com.

“He was here for a week and was involved in three or four training sessions because Molde had league games.

“It is impossible to judge him within that time. He will probably come back, he did all right. ”

Billy Michael Auta, who made the Flying Eagles provisional World Cup roster, will follow in the footsteps of Daniel Chima and Emmanuel Ekpo if he is offered a deal by Molde in the long run.