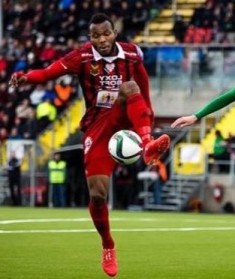 Michael Omoh was pleased to score for a third consecutive league match as östersunds FK beat Ljungskile on match day 11 in the Swedish Superettan on Saturday evening.

The 23 - year - old’s second minute goal saw him equal his best scoring run since he arrived Sweden four years ago, which he first set while representing Dalkurd in the third - tier in 2014 between 26th April to 10th May.

“This is not really my best scoring run. I had this same scoring streak with my former team, but it is very good I am doing it again, ” says Michael Omoh to allnigeriasoccer.com.

“ Ljungskile were tough, tough opponents. It was a tough victory.”

Though östersunds FK are the only undefeated team in the division, they sit second on the table with 25 points.