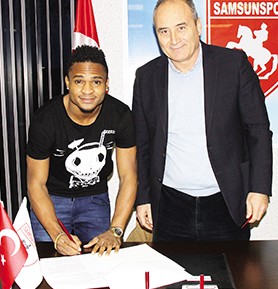 Chikeluba Ofoedu scored his 10th goal in the jersey of Samsunspor in their 4 - 0 win over Alanyaspor on Monday night in the Turkish 1 Lig semi - final second leg.

After a goalless first half half, the former Enugu Rangers striker finally broke the deadlock after 67 minutes before Eren Tozlu,
Recep Niyaz and Alperen Pak bagged a goal apiece.

The Red Lightning will face Antalyaspor in the promotion play - offs final on Friday June 5.

Chikeluba Ofoedu has netted 13 goals in 27 matches this term, with three of the goals coming in the colours of Karåÿä±yaka.