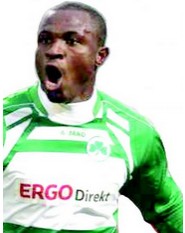 Celebrated German sports magazine Kicker has rated MSV Duisburg’s Kingsley Onuegbu the best striker in the 3 Liga for the second half of the 2014 - 2015 season.

During the period under review, the 29 - year - old notched 11 goals and created three others, which assisted his club gain promotion to the second - tier of German football.

“In the second part Kingsley was light-footed. At some point in the spring I said to him that in every game I expect him to score.

“And he has actually almost met the target,”  said coach Gino Lettieri to the Nuremberg - based publication.

Earlier this month, Kingsley Onuegbu signed a fresh one - year deal that will keep him at Schauinsland-Reisen-Arena until June 30, 2016.